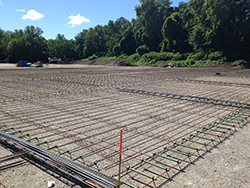 Ladue’s brush and mulch site was one of the oldest professionally managed, most successful composting facilities in the nation. After Ladue discontinued burning leaves  (common method of getting rid of leaves at the time) in the mid 70’s and more environmentally friendly options were sought, alternative processing methods and siting locations became a focal point of the City’s Department of Public Works and Leaf and Brush Committee. Ladue residents were polled on their preferred program of collection and disposal in 1978 and more than 77% wanted leaf and brush collection, as well as mulching rather than landfill disposal. Preparation of the current site, located at 9810 South Outer 40 Road, began in 1988, after purchase of a 14.5 acre parcel of land from Union Electric for $275,000. The facility officially opened in 1989, and has been operational ever since.

Despite a few initial challenges, the site has served its purpose very well and has received very high marks from industry colleagues and professionals. In 1992 St. Louis County Director of Transportation and Environmental Policy Lee Brotherton quoted “It is particularly notable that the City of Ladue has taken such a visionary approach to the program of municipal yard waste.” And Missouri State Representative at the time James Barnes had this to say about the operation “It was interesting to see what is truly the Cadillac of compost sites in and about the St. Louis Metropolitan area.” 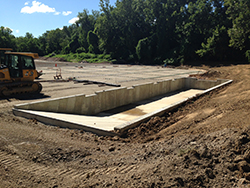 The same year, composting went from being a good idea, to a state law. With the passage of Senate Bill 530, yard waste was banned from the landfill in the State of Missouri beginning January 1, 1992. In 2005 the Ladue Mulch Site was renamed “Edie’s Mulch Site” after former Mayor Edith Spink and was featured in the June issue of BioCycle magazine which spoke about the success of the facility.

Today The City of Ladue Public Works Department collects on average 50,000 cubic yards of leaves and brush annually. In February, 2017 the Ladue CIty Council voted to discontinue to production of mulch from the site. The brush and leaves collected by the Public Works Department are transferred from the site to Hansen's Environmental Wood Resources for processing. Ladue residents can get a discount on mulch products from Hansen's. Call 636-379-1830 for more information.

Do you have questions or want to know more about the Public Works Department? Click the links below: