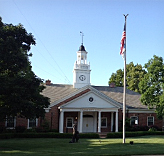 Welcome to the City of Ladue Administration Department Website

The Administration Department works directly with the Mayor and City Council and is responsible for general oversight, administration and management of the City on a day-to-day basis and implementation of policy adopted by the City Council, including the annual operating budget and capital projects.

In addition the City Clerk accepts filing for candidacy in municipal elections, administers the oath of office to public officials and certain employees, and is the Custodian of Records and Seal of the City.

Notice under the Americans with Disabilities Act

ADA coordinator for the City of Ladue is Stacey Mann. Stacey can be reached at 314-993-3439 or smann@cityofladue-mo.org.

Please submit the Form to the Custodian of Records at smann@cityofladue-mo.gov or 9345 Clayton Road, Ladue, Mo. 63124.

Hours: Mon-Fri 8am-5pm,
except for holidays